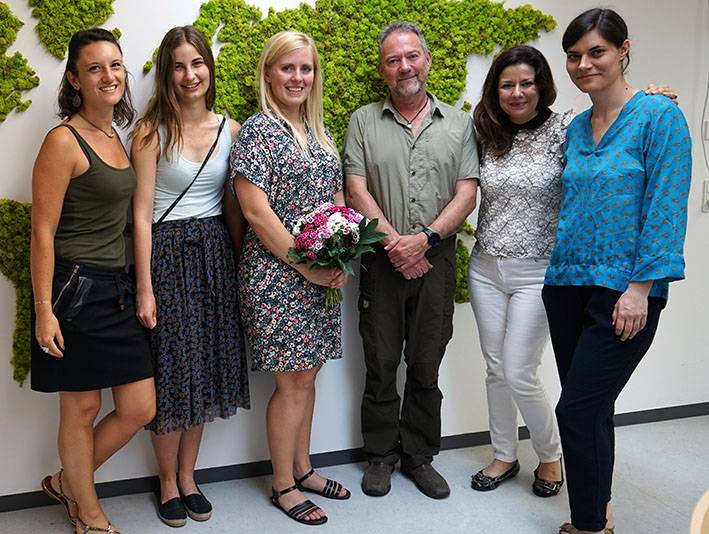 Her thesis focused on the priority species identified by the IUCN/SSC Asian Species Action Partnership (IUCN SSC ASAP), a global initiative focused on the conservation of Critically Endangered species in Southeast Asia.

Wildlife in Southeast Asia is in rapid decline largely due to habitat loss, climate change, commercial hunting and invasive species. This substantiates the need for insurance populations and genetic rescue to secure remaining populations until habitats are restored and threats are mitigated.

Genetic rescue can increase the fitness of small populations with low genetic diversity by introduction of new genes from other populations of the same species. Furthermore, by biobanking samples zoos and aquariums can provide genetic knowledge necessary for use in current and future genetic rescue efforts addressed at both managed as well as wild populations. Genetic rescue can take place through the transfer of individuals, but also by using germplasm, as in the restoration of founder genetic variation through artificial insemination. Viable cell cultures may also serve as sources of genetic rescue to restore genetic variation to small populations by cloning or stem cell technology. (Read more about the importance of genetic rescue in our article in EAZA’s magazine ZOOQUARIA).

However, genetic rescue and biobanking efforts rely on finite conservation resources (money, space, time) which make it necessary to prioritize species at highest risk and for which samples are most easily obtainable. For example, species that are highly threatened and present in a Species360 member institution would be ideal candidates for genetic sampling. Line overall compiled 11 different prioritization schemes to identify which of the 211 Critically Endangered species both hold a sampling opportunity and are in biggest need of immediate action.

She found that 33% (70) of the 211 assessed ASAP species are present in the Species360 ZIMS network and that 30 species are managed in a Studbook, while for 75% (159) it remains unknown if they are included in ongoing in-situ conservation (breeding facilities or action plans). She also found that 35% (73) species provide a high or medium opportunity for sampling and of these 34% (25) are Evolutionary Distinct and Globally Endangered, while 26% (19) are either Vulnerable to Climate Change or a part of the Alliance of Zero Extinction prioritization scheme (i.e. at least 95% of their remaining population live in the same area). Due to their sampling opportunity and imminent threat of extinction we recommend that 44 species should be further investigated for genetic rescue and biobanking.

The thesis was supervised by Prof. Dalia A. Conde, Species360 Director of Science in collaboration with Nerissa Chao, the Director of the ASAP Initiative and Dr. Sonja Luz, Director of Conservation & Research at Wildlife Reserves Singapore. The thesis was evaluated by Richard Østerballe, Director of Givskud Zoo. The results of this study will be published in a peer-reviewed journal and made publicly available on our Species360 Open Data Portal.