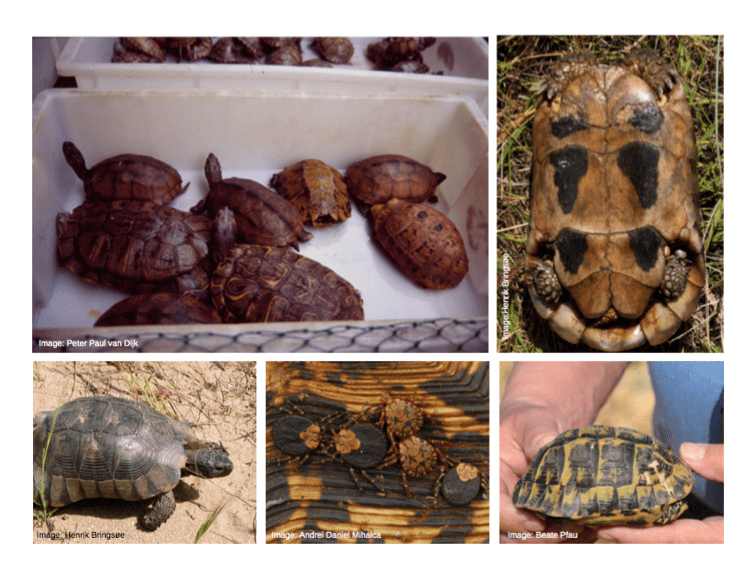 Annually, about 865,000 specimens of live tortoises and freshwater turtles (Testudines) listed in the Appendices of the Convention on International Trade in Endangered Species of Wild Flora and Fauna (CITES) are legally traded in the international wildlife trade for the pet trade, as meat or for medicinal or ornamental purposes. The vast majority of those originate from captive-breeding and ranching facilities (CITES, CoP17 Doc. 73).

CITES requires documentation of the source of a specimen and applies strict conditions that have to be met when a specimen is declared as produced in captivity. The high number of transactions of specimens claimed to be produced in captivity, however, has raised concerns about the potential misuse of source codes. Claims of commercial captive-breeding (source code C) is especially questionable for many turtles and tortoises as it requires considerable amounts of resources and expertise and many turtles and tortoises grow slowly and mature late, making commercial captive-breeding unprofitable. Custom officers and inspection officials are challenged to identify misuse of source codes, given the high numbers of exports and imports.

For more than 45 years, Species360 member contributions created the world’s most comprehensive database on ex-situ information, the Zoological Information Management System (ZIMS), including demographic, husbandry and medical data for more than 22,000 species (Species360, 2020). ZIMS data includes more than  130,000 records of over 290 species of turtles and tortoises (Species360 ZIMS, 2020).

Given this wealth of knowledge on the husbandry and captive-breeding of turtles and tortoises the CITES Secretariat has commissioned the Species360 Conservation Science Alliance (CSA) to implement CITES Decision 17.291 a ii: Developing guidance concerning the differentiation of specimens of tortoises and freshwater turtles (Testudines) originating from the wild, from those from captive and ranching production system.

The CSA, in collaboration with worldwide turtle experts, including Beate Pfau from the German Association for Herpetology and Terraristic (DGHT) and Peter Paul van Dijk from the Turle Conservancy, Global Wildlife Conservation and the IUCN SSC Tortoise & Freshwater Turtle Specialist Group developed a comprehensive illustrated manual on how to differentiate wild from captive-bred turtles and tortoises.

The aim of the manual is to provide guidance for inspection officials, customs officers and CITES Management and Scientific Authorities to aid in the identification of potential misuse of source codes. The manual includes an inspection key, the different criteria to determine wild-caught versus captive-produced origin, an illustrated guide and a database on turtles and tortoises demographic traits.

Learn more about the CSA’s research on wildlife trade here.